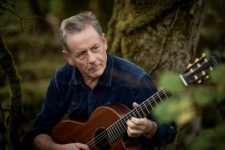 “I was a very different person then. I was lost. I was drinking way too much. I was in a lot of trouble inside internally,” Luka Bloom tells Noise11.com. “I went on to make two more records under my real name. They completely disappeared without trace. That was 1977. By 1986, I was beginning finally to find my voice and to write some decent songs. But because of the three albums that had gone nowhere I needed to make a dramatic change in my life to give my songs an opportunity to be heard. That’s why I created Luka Bloom”.

Barry was a very different person to Luka. “23-year old Barry was a very, very lost little boy,” Luka says. “I have a lot of affection for that album ‘Treaty Stone’. My brother Christy (Moore) produced it in Dublin. A guy called Brian Masterton engineered it and Brian Masterton engineered ‘Bittersweet Crimson’. That is a professional thread from the 23-year old Barry to the 65 year old Luka”.

So what was 23-year old Barry Moore like? “I was so far up my rear end. Selfish, self-centered, stuck in an absolute mess of raw emotion not making any sense of the world. Funnily enough, I am still trying to make sense of the world. In that sense, there was a song on ‘Treaty Stone’ called “Bury My Heart At Wounded Knee’. It would have been talking about similar issues to ‘Who Will Heal The Land’. I can see a direct line. I grew up in a house where my mother lived a very, very difficult life because of the premature death of our father. She gave us some sense of injustice in the world and that was reflected in that song. ‘Who Will Heal The land’ was inspired by the fires in Australia at the turn of this year”.

Luka concluded, “I was as messed up as many 23-year olds are at that age and I continued to be for many years. Its not so much that I am wiser at 65. The thing I am grateful for is that I survived”.

Luka Bloom’s ‘Bittersweet Crimson’ is available only from his website.