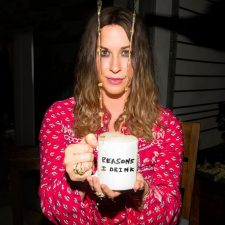 All Australian performances by Alanis Morissette will feature a complete performance of her iconic third album ‘Jagged Little Pill’.

‘Jagged Little Pill’ documented a woman scorned. The scorner is said to be ‘Full House’ actor Dave Coulier, who was dating and broke up with Alanis, just before the recording of the album.

That being the case, we learn a lot about the life of ‘Uncle Joey’ in the first few lines of ‘You Oughta Know’.

I want you to know, that I am happy for you
I wish nothing but the best for you both
An older version of me
Is she perverted like me?
Would she go down on you in a theater?

Alanis Morissette will perform the entire ‘Jagged Little Pill’ album at Bluesfest and now in Sydney on 11 April and Melbourne on 15 April.

Tickets for Alanis Morissette in Sydney and Melbourne will go on sale on 7 February.