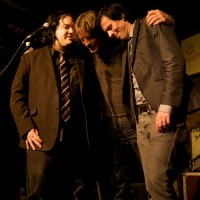 The final night of the SXSW Film Festival will feature an all-star performance of the Big Star ‘Third’ album.

On Thursday, March 15 at the Paramount Theatre in Austin, the band featuring Jody Stephens of Big Star on drums; Mike Mills of R.E.M. on bass; Mitch Easter of Let’s Active and Chris Stamey on guitars; Charles Cleaver on piano, guest guitarists Peter Buck of R.E.M., Tommy Stinson of the Replacements, and Jon Auer and Ken Stringfellow of the Posies, as well as a wide range of guest vocalists, will perform ‘Third’, the 1978 album by Big Star.

The performance will be preceded by a word-in-progress screening of the documentary ‘Big Star: Nothing Can Hurt Me’.

Then on Saturday, March 17, members of Mumford & Sons, Edward Sharpe & The Magnetic Zeros and the Old Crow Medicine Show will join Big Easy Express director Emmett Malloy and producers Tim Lynch, Mike Luba and Bryan Ling for a Q&A and then acoustic set.

Big Star Nothing Can Hurt Me Doco To Screen In UK

Big Star's 'Nothing Can Hurt Me' documentary will screen across the UK in August.

Influential label owner Charles Ball passed away on Tuesday after a heart attack.

Members of R.E.M., The Posies, The Replacements and more perform Big Star’s Third album on the second anniversary of Alex Chilton’s death.