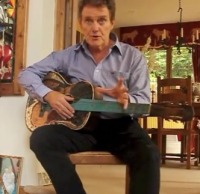 Alvin Stardust was the owner of a guitar insured for $AUD2.74 million (£UK1.5 million).

12-year old Bernard Jewry, who would later change his name to Alvin Stardust. “When I was 12 my mum and dad bought me my first guitar for my birthday. They paid £1 10 shillings for it.”

Young Bernard took his guitar with him when he went to a Buddy Holly concert in Doncaster, UK fours later. It turned out it was his ticket backstage where he not only met Buddy Holly & The Crickets but they also jammed on a version of ‘Peggy Sue’ with teenage Bernie. Before he left, Holly, and the Crickets signed the guitar for Bernard. From then on he christened the guitar ‘Peggy Sue’.

As his career grew and Bernard became Alvin Stardust he took the guitar everywhere. It has signatures from not only Holly but also Brian Jones and Mick Jagger of the Rolling Stones, John Lennon of The Beatles, Marty Wilde and Johnny Kidd.

Alvin Stardust kept the guitar right up until his death this week. It was his prized possession.

Music legend Engelbert Humperdinck has paid tribute to the late Alvin Stardust, referring to his friend as “a gentleman’.

I was very saddened to hear about the passing of Alvin Stardust. He was a gentleman in our industry and will be sadly missed.#AlvinStardust

Another little known fact, Bernard Jewry was not the original Alvin Stardust, not is that his vocals on ‘My Choo Ca Choo’.

The original Alvin Stardust was Peter Shelley, who would have a hit with ‘Gee Baby’ under his own name a year later.

Shelley created Alvin Stardust as a one-off. He is Alvin Stardust on the hit version of ‘My Choo Ca Choo’. After the song became a hit Shelley decided he didn’t want to continue as Alvin and Bernard Jewry (now using the stage name Shane Fenton) was handed the character.

Alvin Stardust has died at age 72 just weeks after announcing his comeback.

70s popstar Alvin Stardust is planning a comeback with his first album in 30 years planned for release in November.