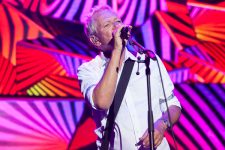 American Psycho author Bret Easton Ellis is working on his next book ‘The Shards’ and imagining the music that would be playing from the era that may be included in a future movie soundtrack.

“Notes on music that would be playing at the new space on Melrose 1981 LA in the book I’m working on. Chapter 10: The Space,” Bret posted to Instagram.

Ellis has chosen two Australian-made songs to fit the moment, ‘Icehouse’ by Icehouse and ‘I Got You’ by Split Enz (yes we know Enz are from New Zealand but they were Melbourne based at the time and the band recorded their True Colours album at Armstrong Studios in Melbourne).

Bret Easton Ellis’ first book ‘Less Than Zero’ was published in 1985. He was 21 at the time. His third novel ‘American Psycho’ was considered violent and misogynistic but became a best-selling movie and then movie starring Christian Bale as Patrick Bateman.

Ellis appears to have an Elvis Costello fixation. His first book ‘Less Than Zero’ was titled after Elvis’ ‘My Aim Is True’ album track. His 2010 novel ‘Imperial Bedroom’, the sequel to ‘Less Than Zero’ is named after the 1982 Costello album.