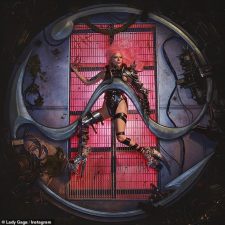 The sixth studio album for American singer Lady Gaga called “Chromatica” debuts at the top of the ARIA Albums Chart this week, becoming her fourth No.1 album in Australia in the process.

So with all of her weeks at No.1, Lady Gaga has amassed seventeen weeks at the top here, moving her up from equal 38th to now 34th on the list for ‘Accumulated Weeks at No.1: Albums’ just behind Bon Jovi (17 weeks from 10 #1 LP’s) and just ahead of both John Lennon and Kings of Leon (17 weeks from 3 #1 LP’s). She also joins 19 other acts who’ve all had four No.1 albums here, the most recent for 2020 was 5 Seconds of Summer back in early April.

There has never been an album titled “Chromatica” chart in the past, let alone hit No.1, so this is a first for that word at the top. The new No.1 album also becomes the 310th No.1 Album by an American performer (solo, duo or group, male or female) and the sixth for the year after Selena Gomez, Eminem, Billie Eilish, Green Day and the last was Lil’ Uzi Vert in mid-March. For solo female artists this is now the 135th to hit No.1 in Australia and the fourth for 2020 after Selena, Billie and Dua Lipa was the last in late April. In terms of Solo Female American singers Lady Gaga is now fourth on the list for ‘Most Weeks at No.1: Solo Female American’ with the Top 5 now consisting of Pink (43 weeks), Mariah Carey (20 weeks), Madonna (19 weeks), Lady Gaga (17 weeks) and Taylor Swift (16 weeks).

Rising back up one spot to No.2 is the Harry Styles set “Fine Line”, which next week will have spent half-a-year within the Top 10, followed by Billie Eilish with “When We All Fall Asleep, Where Do We Go?”, back up two places to No.3 and newly certified 2x▲Platinum in sales. These are followed by the second and third entries within Top 10 this week, coming in at No.4 is the fourth studio album for U.S. country artist Kip Moore called “Wild World”, becoming his fourth Top 50 entry (3 albums and 1 EP), his second Top 10 entry here and now his highest charted album locally, as it enters two places higher than his last album from September of 2017 called “Slowheart” (HP-6).

Returning to the charts for the first time in almost nine years is the third studio album for Cold Chisel called “East”, which is celebrating its 40th anniversary of release this past week by returning to the charts at No.5, it’s first Top 10 placing since early December of 1980, having originally spent eight broken weeks at a peak of No.2 (six weeks and then another two) and 23 weeks within the Top 10, it now lands its 24th week inside the ten, with it last charting in late July of 2011 hitting No.19 (in early August).

After this are three albums holding steady this week, starting with Dua Lipa and “Future Nostalgia” at No.6, The Weeknd with “After Hours” at No.7 and Post Malone logs a 32nd week within the Top 10 with his set “Hollywood’s Bleeding” at No.8, with the album picking up a ▲Platinum sales certification too. Norwegian producer, songwriter and DJ called Kygo sees his third album called “Golden Hour” debut at No.9 this week to become the fourth and final Top 10 entry of the week (and Top 50 entry too). It’s also his third Top 50 placing, with his two previous entries being for the albums “Cloud Nine” (HP-13, 2016) and “Kids in Love” (HP-42, 2017). There have already been six singles charting here from the album, the biggest of which was the No.20 2019 single “Higher Love” with Whitney Houston and he is currently charting with “Lose Somebody” alongside OneRepublic which hits a new peak of No.31 this week.

The Lewis Capaldi debut album “Divinely Uninspired to a Hellish Extent” jumps back up eight places to land at No.10, becoming it’s third overall week within the Top 10 (#10 upon debut in late May 2019 and No.7 in January 2020), with the set newly certified Gold (●) in sales, and it also has three Top 50 singles from the album as of this week.

UP:
* The first of two of last week’s new entries to climb this week is the double EP set for Benee called “Fire on Marzz”/”Stella & Steve”, which climbs two places to a new peak of No.19.
* The Seekers new collection “Hidden Treasures Vol.1” leaps up eighteen places to a new peak this week of No.21.
* The two older Post Malone albums are back up this week in “Beerbongs & Bentley’s” climbing four spots to No.23 and his first set “Stoney” is back up eight places No.47.
* With a new Top 50 singles chart entry this week for Tones and I her 2019 EP “The Kids are Coming” is back up nine spots to No.26.
* Halsey might have two falling singles within the Top 50 this week, but her latest album “Manic” climbs back up four spots to No.27.
* Climbing best of sets this week are for Cold Chisel (41 to No.28), Eminem (38 to No.30, newly 12x▲Platinum in sales {up from 6xP previously}), INXS (43 to No.33) and Paul Kelly (56 to No.49).
* Dean Lewis’ “A Place We Knew” is back up three spots to No.37.
* In the lower fifty albums last week Powderfinger returned to the charts with two of their best of sets at No.67 and No.87, thanks to their recent online concert called “One Night Lonely”, and that has also helped their first No.1 album from 1998 called “Internationalist” (peaked Sept. 1998 upon debut) to return to the Top 50 this week at No.40.
* The recent No.1 set for Birds of Tokyo called “Human Design” is back up eight places to No.41.
* Right after which LAUV sees his set “~How I’m Feeling~” rise back up five spots to No.42.
* Niall Horan just issued a new single called “Black & White” from his album “Heartbreak Weather” and that helps the set to rise back up six places to No.46.

There are no further Top 50 entries than those within the Top 10 this week.