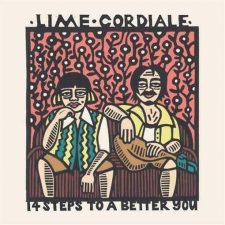 The second studio album for Sydney group Lime Cordiale called “14 Steps to a Better You” debut’s at No.1 on the ARIA Albums Chart this week, becoming their second chart entry, first Top 10 and No.1 Album too.

Lime Cordiale are led by the brothers Oliver and Louis Leimbach and the group formed in 2009 around the Northern Beaches of Sydney, first coming to the attention of Icehouse frontman Iva Davies who gave them the support act on his bands 2011 comeback tour. The band issued three EP’s from 2012 to 2015 and their first studio album “Permanent Vacation” which made it to No.79 in October of 2017. Of the eight singles previously issued from this 14 track album, the only chart entry has been their Triple J Hottest 100 #7 single for 2019 in “Robbery” which made it to No.63 upon debut back in February of this year.

Even though Lime Cordiale are led by the two Leimbach brothers, there are still a six piece outfit, so instead of classing them as a duo I have categorized them as a group. So the band becomes the 245th Australian act (solo, duo, group, male or female) to top the local charts and the ninth for 2020, which already surpasses the eight from 2019 and 2017, while its close to the ten Aussie No.1 albums from 2018 (20 in 2016 is the record to beat). They are also the first sole Australian act at the top in almost a month as Vika & Linda last hit the top on June 22nd (although the “Music from the Home Front” {2 weeks from June 26th} album was full of local acts too), and Lime Cordiale become the 119th Australian Act to hit No.1 here also. For groups the band are now the 392nd to hit the top locally, and the first time since 2016 that we’ve cracked double figures for groups at No.1 during a calendar year, as we’ve now racked up eleven groups at the top this year (it was 20 in 2016), the last being The 1975 at the start of June, while the new No.1 album also give the band the honour of becoming the 66th Australian Group to hit the top here.

There are three albums landing within the top three spots this week, with Sydney trip-hop trio DMA’s coming in at No.2 with their third album “The Glow”, which becomes their third Top 10 album and fourth overall entry (3 albums and 1 Live set), following on from “Hills End” (HP-8, March 2016) and “For Now” (HP-7, May 2018) and last years “MTV Unplugged: Live” (HP-94, July 2019), with their new album also landing at No.1 in Scotland and No.4 in England this weekend.

The third album and first posthumous release for slain rapper Juice WRLD called “Legends Never Die” comes in at No.3 this week to become his second Top 10 placing and fourth overall albums chart entry (3 studios and one mixtape alongside rapper Future), plus this new set becomes his highest charted album and it debuted at No.1 in New Zealand, England, Ireland and Norway (so far). Nine singles from the album are within the Top 50 singles chart this week including it’s first release “Righteous” (HP-15, peaked May 2020) is back within the Top 100 at No.25, while he scores two Top 10 placings in “Come & Go” with Marshmello and “Life’s a Mess” with Halsey, with other acts helping to finish the album and lend their vocals to his tracks including Trippie Redd, Polo G, The Kid Laroi, Dr. Luke and Skrillex.

Last weeks “slain-rapper” entry was for Pop Smoke which came in at No.1 (I thought we might have had the first back-to-back posthumous No.1’s this week for the first time ever, but alas not yet) and it falls three spots to No.4 this week, followed by a single place slip to No.5 for Harry Styles’ “Fine Line” and after a huge return to the chart last week the ‘Hamilton’ cast recording is up one spot this week to a new peak of No.6, while it also swaps places with the Billie Eilish debut album “When We All Fall Asleep, Where Do We Go” down one to No.7 and logging its 66th week within the Top 10 too. Dropping three places to No.8 is the recent No.1 compilation “Music from the Home Front”, followed by a returning-to-the-ten album for Luke Combs in “What You See is What You Get” which is back up two places to No.9 and now spending its tenth overall week within the ten, and lastly down one spot to No.10 is the Post Malone set “Hollywood’s Bleeding” which is now up to its 38th week within the Top 10.

FURTHER NEW ENTRIES:
* #28 (LP#3) – Monsters by The Midnight is the third album for the Los Angeles based duo of Jamison Tyler Lyle and Tim Daniel McEwan who met in 2012 and released their first material as an EP in 2014, followed by their debut album in 2016 called “Endless Summer”, after which was “Nocturnal” (EP in 2017) and then in 2018 their second album called “Kids”, while this becomes their first charted album in Australia too.

Vika and Linda Bull went more than a decade without a new album and then delivered two this year.