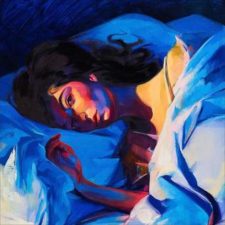 Australian Charts: Lorde Takes Over No 1 Album Spot With Melodrama

The second studio album for New Zealand female artist Lorde becomes her second No.1 album in Australia, as “Melodrama” debuts in the pole position on the ARIA Albums Chart this week.

This becomes the second No.1 for Lorde, as her debut set “Pure Heroine” (jumping this week up forty-nine places to No.26) debuted and peaked for a single week in the first week of October in 2013, and this album also enters in the top spot in her home country of New Zealand (OZ & NZ the only two #1’s so far). Lorde also joins the list of ‘Accumulated Weeks at No.1: Albums’, as she now has two chart-topping albums, and sits at equal 25th with twelve other acts who have also had two #1’s and two weeks at the top in this decade like Madonna, 5SOS, RuFuS, Sia, Flume, Jimmy Barnes, Nick Cave and The Weeknd.

This is the first time that the word ‘Melodrama’ or even ‘Melo’ or ‘Drama’ have appeared in a No.1 album title and as Lorde is the only female artist from New Zealand to hit the top here, she now extends her weeks at the top to two, and the new album becomes the eleventh chart-topping set by a New Zealand act, and the album is also the 119th by a Solo Female Artist (local or overseas) and the second for this year, as Kasey Chamber spent a week at the top in late January.

After a third run at the top and amassing thirteen weeks so far, the Ed Sheeran album “÷ (Divide)” drops back down a place to No.2 this week, it’s third time in that position (but no lower so far), and then at No.3 is the second of four Top 10 debuts this week, the ninth studio album for Canadian rock band Nickelback entitled “Feed the Machine”. This becomes their eighth Top 10 album here (seven studios and one Best of; TW-out) and second to debut at No.3, as their previous studio album “No Fixed Address” (24-Nov, 2014) debuted and peaked at the same position.

The new UK No.1 Album this week is the No.4 debut here, the second studio album for the English rock duo Royal Blood entitled “How Did We Get so Dark?”, which enters one place lower than their debut self-titled album did back in early September of 2014. Another Englsih act who debuted last week are London Grammar, and their second album “Truth is a Beautiful Thing” drops back down two places to No.5, whilst last weeks highest entry in “Witness” for Katy Perry falls four spots to No.6, but she will be in the country this coming week, so it should/could rise next week.

The third survivor from last weeks five Top 10 debuts is the latest for Hillsong United entitled “Wonder”, which is only down three this week to No.7. Swapping places from last week are Kendrick Lamar and “Damn.” (up one to No.8) and the self-titled debut set from Harry Styles (down one to No.9), whilst the fourth and final entry to the ten occurs at No.10, the third studio album for Fleet Foxes entitled “Crack-Up”, which is their third Top 100 entry and now second to debut within the Top 10, as their previous album “Helplessness Blues” debuted and peaked at No.6 in early May of 2011, whilst their self-titled first set spent a week in the chart at No.90 in early March of 2009.

DOWN:
* The second Ed Sheeran album in “x (Multiply)” (HP-1×8, WI10-105) leaves the Top 10 again this week, down four to No.11, followed by last weeks returning album “Guardians of the Galaxy Vol.2” (HP-2, WI10-7), down two places to No.12. The two further albums leaving the ten this week both debuted within it last week, “Heart Break” (HP-6, WI10-1) for Lady Antebellum is down twelve places to No.18 and falling harder by dropping twenty-three spots to No.28 are Rise Against and their “Wolves” (HP-5, WI10-1) album.
* Halsey and her “hopeless fountain kingdom” are down seven to No.19
* After falling out of the Top 10 last week, the latest Pete Murray set “Camacho” is down thirteen spots this week to No.27.
* And also debuting the same week as Pete Murray were Alt-J with “Relaxer” and Roger Waters’ “Is This the Life We Really Want?”, both albums drops twelve to No.29 and No.32 respectively.
* After a Norton rebound last week, the Keith Urban album “Ripcord” is back down eleven to No.33.
* The Lindsay Buckingham and Christine McVie album that entered last week is down fifteen spots this week to No.36.
* After a Streaming surge last week, the “1989” album for Taylor Swift is back down eleven to No.37.
* Both Ariana Grande albums drop back again this week, with “Dangerous Woman” down eleven to No.41 and “My Everything” falls twelve to No.57.
* Best of sets falling this week go to INXS (28 to 48), Guns N’ Roses (31 to 54), Crowded House (47 to 58), Maroon 5 (65 to 82), Fleetwood Mac (44 to 83 for their GH set), Bee Gees (64 to 88), and Red Hot Chili Peppers (86 to 99).
* Bernard Fanning’s new album leaves the Top 50 after only three weeks within it, as “Brutal Dawn” drops twenty places to No.59.
* Gorillaz drop eleven chart rungs to No.60 with their album “Humanz”.
* Linkin Park dim twelve spots to No.66 with their “One More Light” album.
* Last weeks entry for SZA and “CTRL” is down twenty-eight to No.68, physical is out as of Friday, so it could stablize or climb next week.
* Mark Vincent falls eighteen spots to No.70 with his “Tribute to Mario Lanza” album.
* The EP “Notion” for Tash Sultana is down sixteen spots to No.71.
* Coldplay drops thirteen spots to No.81 with “A Head Full of Dreams”.
* In Hearts Wake are down twenty places to No.91 with their “Ark”.
* The soundtrack for “Fifty Shades Darker” is down twenty spots also, to No.93.
* The Zac Brown Band album “Welcome Home” falls twenty-six places to land at No.95.
* Albums leaving the Top 100 from last weeks fifty are the Elvis and RPO with their two album set “The Wonder of You”/”If I Can Dream” (#29), Phoenix and “Ti Amo” (#36) and Rancid with “Trouble Maker” (#41).

NEW ENTRIES:
* #30 (LP#6) – The Nashville Sound by Jason Isbell & the 400 Unit is the second albums chart entry here for the Alabama Southern Rock artist, who made it to No.32 with his fifth album “Something More Than Free” in late July of 2015 (without his newly formed backing back).

* #51 (S’Tk) – RWBY Vol.4 Soundtrack by Jeff Williams is the first of the four soundtracks from the anime-style web series to chart, and is composed by Jeff Williams who also performs the music with his daughter Casey Lee Williams.

* #52 (LP#4) – Pretty Girls Like Trap Music by 2 Chainz is the first of the US rappers four studio albums to chart here in Australia, this album featuring the previously released single “Good Drank” and “It’s a Vibe”.

* #63 (LP#2) – You, Me and Everything in Between by Belle Haven is the first chart entry for the Melbourne based five piece band whose first album “Everything Ablaze” was released in 2015.

* #67 (LP#2) – From the Outside by Hey Violet is the bands second album, although the members called themselve Cherri Bomb for their 2012 debut set “This is the End of Control”, which did not chart here.

* #89 (LP#1) – Fake Sugar by Beth Ditto is the debut solo album for former Gossip lead singer Beth, who charted two of their five albums here in Australia, this album has so far seen the track “Fire” released, which she sang on Graham Norton screened here on June 23rd and James Corden during the past week.