Australian Charts: Marilyn Manson Has The Number One Album - Noise11.com 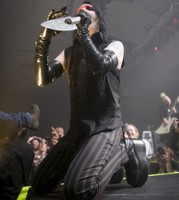 The eleventh studio album for American goth-metal act Marilyn Manson called “We Are Chaos” is the new No.1 album in Australia this week, becoming his second here overall.

It’s been 21 years and 51 weeks since Marilyn Manson was last at No.1 in Australia, as their third album “Mechanical Animals” spent a week at the top on the 27th of September, 1998 (almost 22 years exactly) but this is not the widest gap between No.1’s, Bob Dylan had a 26 year and eleven month gap between October 1979 (Slow Train Coming) and September 2006 (Modern Times). This is also the second ‘We Are’ titled album at No.1, as Slipknot back in August of 2019 went to the top with “We Are Not Your Kind” for one week, while it’s the first time that the word ‘Chaos’ has appeared in a No.1 album title.

This new No.1 album by M.M. is also the 316th by an American Act to hit the top here (solo, duo, group, male or female) and the 395th by a Group (local or overseas), while for 2020 its the fourth by a group from America. For Marilyn Manson this new entry also becomes their seventh Top 10 placing and their first since their tenth set “Heaven Upside Down” (October 2017, HP-4).

The sister duo of Vika and Linda Bull land their second top two album for 2020 this week as their girls’ sixth studio album and first in fourteen years called “Sunday (The Gospel According to Iso)” comes in at No.2 this week, as back on the June 19th, 2020 chart they debuted at the top with their first anthology album “Akilotoa (1994-2006)”, and this new entry now becomes their third Top 10 album locally. During this years lockdown’s the pair have been doing online weekly/Sunday gospel songs via social media, and this resulted in the album of 13 tracks being issued, with songs such as “Amazing Grace”, “Bridge Over Troubled Water” and “Sinnerman” among them.

Taylor Swift is back up one spot to No.3 with her “folklore” album, while the current New Zealand and Canadian (both six weeks) No.1 album for Pop Smoke “Shoot for the Stars, Aim for the Moon” is here back up two places to No.4, followed by a stable No.5 for Juice WRLD and “Legends Never Die”. On Thursday night Harry Styles announced he has had to cancel his November 2020 tour of Australia, so this weeks rise of four places to No.6 for his second album “Fine Line” could see it next week leave the Top 10 after 40 weeks (I think his pending tour could’ve kept the album higher, and the disappointed fans might revolt and drop the album down the charts; we’ll see next week I guess).

After one week out of the ten, this week sees the return to the Top 10 and up four places to No.7 for the Billie Eilish set “When We All Fall Asleep, Where Do We Go?” for a 74th week inside the ten, while last weeks return to No.1 for the compilation set “Music from the Home Front” drops down seven places to land at No.8 this week. Katy Perry’s “Smile” is down two places to No.9 and descending eight spots to No.10 after re-entering at No.2 last week is the Powderfinger album “Odyssey No.5 (20th Ann.Ed.)”.

DOWN:
Three albums leave the Top 10 this week, all of them new entries from last week, starting with the San Cisco set “Between You and Me” (HP-3, WI10-1) down sixteen spots to No.19, after which the0 “Slim and I” soundtrack for Slim Dusty (HP-8, WI10-1) plummets thirty-four places to land at No.42, while the Wil Wagner set “Spiralling” (HP-9, WI10-1) leaves the Top 50 this week.
The Weeknd slides down fourteen places to No.30 with his set “After Hours”, while The Killers set “Imploding the Mirage” declines fourteen places to No.35. Further albums dropping out the Top 50 this week into the lower fifty were new entries from last week for The Rolling Stones (#17), Big Sean (#22, the U.S. No.1 album this week), Rex Orange County (#28) and 6ix9ine (#39).

* #40 (LP#2) – Two Kids and a Radio by Melody Moko (Melody Moko/MGM) is the second album and first chart entry for the local singer/songwriter born and raised in Adelaide, who has also lived in QLD and NSW and toured America in 2019 with Catherine Britt. Her first set from 2017 was called “The Wreckage”.