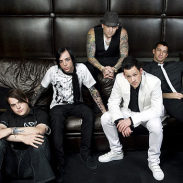 Benji Madden has splashed out $1.1 million on a new home in Los Angeles.

The Good Charlotte rocker dropped the sum for a rustic-looking bungalow tucked away in the Hollywood Hills.

According to TMZ, the 33-year-old guitarist purchased the property back in February after it sat on the market for 192 days.

Benji founded Good Charlotte with his identical twin brother, Joel, back in 1996.

The band, also comprising of bassist Paul Thomas, rhythm guitarist and keyboardist Billy Martin, and drummer Dean Butterworth, enjoyed somewhat of a break after the release of their last studio album, Cardiology, back in 2010.

But recent reviews indicate Benji and Joel have already overstayed their welcome.

In addition to trekking across the country playing their old hits, the brothers are also the faces of two major corporate campaigns airing in Oz. Benji and Joel both feature in ads for Vodafone and fast food chicken joint KFC.

Website Music Feeds has kickstarted a petition to ‘get the Madden Brothers out of Australia’.

But Benji is still pressing hard for presence in the country.

The rocker will feature on a new single called Breakdown with local pop/rock favourite Tonight Alive.

The track is scheduled for release on March 12.

Red Hot Summer has a stack more dates in 2021 across New South Wales, Victoria and the ACT.

The ARIA Awards have been announced for 2020 with Tame Impala and Sampa The Great taking home the bulk of awards.

Australian composer Robert J. Sedky has covered Bob Dylan’s 1997 ‘Time Out Of Mind’ track ‘Not Dark Yet’ for his upcoming E.P. ‘Singing’.

Bluesfest Is Official All-Australian For 2021

Bluesfest has announced that the 2021 music festival will now feature an all-Australian line-up.

This week, the instagram music festival Isol-Aid is rolling out the red carpet to highlight some of Victoria’s finest musicians as it partners with the MUSIC VICTORIA AWARDS to present a lineup jam packed with nominees. The awards celebrate the vast achievements of Victoria’s music community over the last year, recognising that despite live music coming to a standstill, there have still been huge achievements by the Victorian music community.