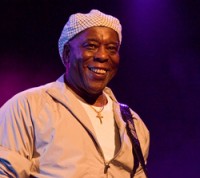 Peter Noble is putting the blues into Bluesfest with the fourth artist announcement for the 2014 music festival with Buddy Guy leading the latest additions but Jake Bugg will also be there.

“Damn right we got the blues at Bluesfest,” Peter Noble said. “I am honoured that the World’s Greatest Blues Guitarist is coming to Bluesfest and to play, not once on our 25th Anniversary Festival, but twice!

Buddy Guy is a regular to Australia but this could be the last time in a long while that the 77-year old guitarist will tour. “I am advised that Buddy Guy is going to be pulling back on international touring and so, as much as I would hesitate to ever say this is his last tour of Australia, it really is going to become more difficult to get him back to our shores in future,” Peter said.

Jake Bugg, this years new singer songwriter discovery, will return to Australia for Bluesfest in 2014.

Artists previously announced for Bluesfest 2014 are:

Bluesfest will be held over the Easter long weekend (17th – 21st of April) at its home, the Tyagarah Tea Tree Farm, north of Byron Bay.

Tickets for Bluesfest are available here.