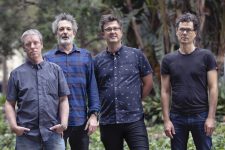 Custard have a new song ‘The Min Min Lights’, an album ‘Respect All Lifeforms’ on the way and singer David McCormack is a hit with everyone 5 and under as the voice of Bandit in ‘Bluey’.

First the new song. David says, “The Min Min Lights are an unexplained light phenomenon that has often been reported in outback Australia. Accounts of the light appearances vary, though they are most commonly described as being fuzzy, disc-shaped lights that appear to hover just above the horizon. Some witnesses describe the light as appearing to approach them several times before retreating. Others report that the lights were able to keep pace with them when they were in a moving motor vehicle.

‘The Min Min Lights’ is the sound of 90s hipsters Custard asking a lot of questions. It’s hard to tell what’s real and what is an illusion. As we consider emerging from isolation, it’s time to reach out to the life we had before. Was it groovy or was it full of hang ups? It is up to you, dear listener, to help us find the answers. If you listen closely you can be transported back to the late 70’s, to Compass Point Studios in the Bahamas, before the crime got too bad. If you listen closer still, maybe there is a hint of Robert Palmer? Maybe it’s The Police?”

About the album David says, “In March 2019 we arrived in Perth to play at a festival. As we were not due on stage until early evening, Glenn booked us into Poons Head studios in Fremantle. Matthew and I drove off to Officeworks to buy a hard drive whilst Glenn and Paul got some sounds happening in the studio. I had some rough chord progressions for a few songs, but that was about all. I knew one song would be called “Couple’s Fight” and another would be called “Funky Again”. Apart from that I was happy to let the universe guide us. We ended up bashing out 8 tracks that day, 6 of which ended up on the album. Upon returning Sydney, Glenn and I retreated to our respective studios to tinker with the tracks, we also came up with some new ones. Thanks to the magic in the air at Poons Head Studios that crisp March morning, we now have a new album. Ladies and gentlemen, Respect All Lifeforms.”

‘Respect All Lifeforms’ will be released on May 22.

The kids TV show ‘Bluey’ has become the most watched show ever on iView with over 230 million views. David is Bandit. The show has also featured appearances of Anthony Field of The Wiggles, Megan Washington and Myf Warhurst.