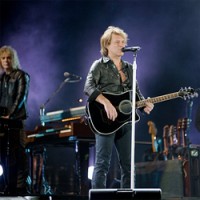 Jon Bon Jovi’s daughter was arrested this morning after overdosing on heroin, according to reports.

Emergency personnel responded to the scene at her Hamilton College dorm.

Stephanie was reportedly taken to a local hospital and is expected to be released on Wednesday.

The Town of Kirkland Police Department conducted a search in her room and found a ‘small quantity’ of heroin, marijuana and other drug paraphernalia, according to the outlet.

The teenager was reportedly arrested and charged her with three misdemeanours: possession of a controlled substance, possession of marijuana and criminally using drug paraphernalia.

Both students have been released from police custody and are expected to appear in court at a later date.

Hamilton College told the news station they are cooperating with police in the investigation.

The singer has yet to issue comment on the report.

Jon Bon Jovi's son Jacob has "fully recovered" from an intestinal bout of the coronavirus.

After being forced to cancel their world tour and delay a highly-anticipated album, Rock and Roll Hall of Fame band Bon Jovi announced today that their new album 2020 has officially been set for release on October 2, 2020 on Island Records.

Jon Bon Jovi appeared before children at Marsh Pointe Elementary School via a laptop during a writing lesson about life in quarantine, having previously released an incomplete version of 'Do What You Can' - which focuses on the battle to contain the coronavirus - and asked fans to submit verses to help complete the song.

Jon Bon Jovi is convinced his teenage son had a "mild version" of coronavirus but also says e wasn't tested so they don't know for sure.

Bon Jovi have just popped out the first single off their next album ‘Bon Jovi:2020’. Listen to ‘Limitless’.