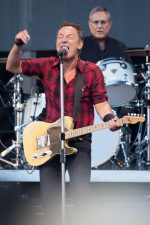 Bruce Springsteen agreed to be part of director Tom Jones’ new documentary about The Boss’ beloved Asbury Park, New Jersey after seeing a rough cut at a film festival.

Jones feared his film, Asbury Park: Riot, Redemption, Rock ‘n’ Roll, would fall flat after Springsteen’s aides turned down an interview request, but he pressed on with the project and eventually, Bruce came to him.

“I put together a package and sent it off to Bruce’s management and they declined, so we put it away, and then they started this film festival in Asbury Park and asked me to show clips from the film I shot,” the filmmaker tells WENN. “We did 76 interviews but we did not have Bruce in it. It was becoming the world’s most expensive home movie!

“We put it up at the Asbury Park film festival two years ago and Bruce surprised us and came… Then he called the next day and said, ‘Hey, it’s a really great film. I’d like to be in it!’ Bruce saved me… and now we have a theatrical release.

“We’ve had to be very careful about Bruce and the way he’s used and the way we’ve marketed the film. He did us a huge favour and we tried to be respectful of that.”

Jones always felt he was destined to meet Springsteen one day, because the rocker has always loomed large in his life.

“When I was a kid Bruce roomed for a while with my best friend’s older brother – before he had an album…,” the filmmaker recalls. “His music was the soundtrack of my childhood.

“We also owned the house that was next to Bruce’s house in New Jersey, that he sold about six months ago and I never met him! He was so nice to my grandfather, who, at the time, was in his 80s and who was a crossing guard at the little school across from his (Springsteen) house. He used to come out and say hi.

“They were pals and it’s ironic that I never got to meet him. I didn’t meet him until we finished the first version of the film.”

Cliff Williams Says Malcolm Young Would Like AC/DC ‘Power Up’

Cliff Williams hopes the late Malcolm Young is “looking down” on AC/DC and “liking” their new record.

A signed copy of John Lennon's 'Double Fantasy', signed by Lennon for murderer Mark Chapman just hours before Chapman killed Lennon, is up for auction.

AC/DC have rarely performed the classic ‘It’s A Long Way To The Top (If You Wanna Rock n Roll)’. The song was only played at AC/DC shows between 1975 and 1979. During that time they performed it 235 times which is a lot, but then as an Australian pub band it was not usual for the band to play seven times a week and sometimes twice on the same day.

Wolfgang Van Halen has revealed his father Eddie Van Halen battled a brain tumour and stage four lung cancer before he passed away.