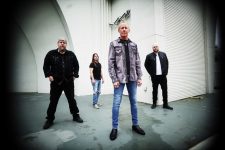 Musician and businessman Zach Bair is donating proceeds from his new music to the American Foundation for Suicide Prevention.

The title track from the Zach Bair Band’s ‘Ordinary Girl’ was completed earlier this year after Zach first demoed it nearly 15 years ago. He was driven to compete the song after the death of an employee but the ‘Ordinary Girl’ story has a happy ending.

“I sat on it and intended to do something with it but life got in the way,” Zach tells Noise11.com. “I wrote it because there was a girl contemplating suicide. After being surrounded by love and support she didn’t do it and lived her life. That’s what that song is about.

“Flash forward to last year, we had a young employee, 28-year old. She committed suicide. There were no obvious signs she was suicidal. It got me thinking that I needed to finish it and do something with that song”.

To give the project importance Zach created a goal in finding a partner organization. “I was working on getting a partner for suicide awareness,” he said. “I pushed the release of the E.P. to September 1 to coincide with National Suicide Awareness Month and ended up working with an organization called The American Foundation for Suicide Prevention and donating 20% of the proceeds from the singles and the E.P”.

Juggling the focused world of business with the creative world of music came easy for Zach. “I’ve always been a musician,” he says. “I started paying piano at a very young age. I was about four years old. My mother had a grand piano and she would accuse me of banging on the piano. I always loved music. I got into music more seriously when I got into high school or college. I knew at an early age I didn’t want to be that guy who would find some guys and go and live in a one bedroom, no air-conditioning, one-bedroom apartment in L.A. and try and make it. I knew my acumen was in business and technology and that I would build my career in technology and as I go along the way I would I would leverage that technology and relationships and that’s eventually what led to the music business and that’s been my career”.

Zach’s business upbringing has given him an understanding of the words “music” and “business’ in the term, Music Business. “Its definitely come in handy because I can see both sides of the equation,” he says. “Don’t get me wrong. I respect the artists that play music they like. At the same time when you are writing a song, you can’t go too left field or right field because people won’t understand what you are conveying and what you are trying to say with your music. I love Rush, I love Dream Theater, but they are musician’s bands. The thing I always came back to with songwriting is emotion first then come back to something that makes them move or feel good”.

For help or information about Depression, call Lifeline, 131 114, or visit beyondblue.org.au.