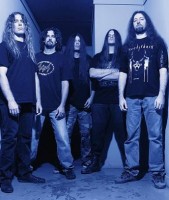 Cannibal Corpse To Return To Australia

Florida’s Cannibal Corpse will be back in Australia in October touring off the back of the new album ‘Torture’.

Cannibal Corpse has an interesting history with Australia. In 1996 all Cannibal Corpse recordings were banned from sale in the country and all copies were ordered to be removed from shops because they were deemed “potentially offensive”.

In 2006, the ban was lifted and their 10 studio albums, live album, boxed set and EP were allowed back on sale in Australia. However, they were restricted to sale to 18 year olds and over. Some of the albums were then available in censored and uncensored editions.

When discussions about banning one of their recent Australian tours was started, Andrew Hansen from comedy show The Chasers War On Everything decided to solve problem by recording a lounge version of Cannibal Corpse’s song ‘Rancid Amputation’. (Watch the video below).

Australian dates for Cannibal Corpse are:

The 2016 Screen Music Awards will be in Sydney this year and Chris Taylor and Andrew Hansen of The Chaser will host.