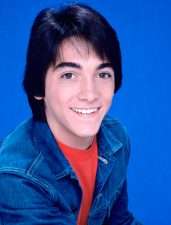 We have a new candidate for the “stories you just can’t make up” pile.

According to TMZ, Nancy Mack, the wife of Red Hot Chili Peppers drummer Chad Smith, has been accused of assaulting actor Scott Baio, supposedly for his support of Donald Trump.

Baio spoke at the Republican convention last summer and has been a vocal supporter of Trump.

According to reports, the two were at an event when Mack started screaming at Baio, repeatedly saying “Grab ’em by the pussy”, a statement made by Trump in a backstage video tape when he was on the program Access Hollywood in 2005.

Baio is said to have asked Mack to tone it down as there were children present but Mack continued to scream at the actor. Scott then said that she grabbed him under the arms and began shaking and pushing him.

Sources told TMZ that Mack is denying the charges, saying that she simply grabbed Baio as Trump said he grabbed women and that she did not attack him.

A report has been filed with the Ventura County police who are investigating whether Mack should be charged with battery.

Gloria Estefan Is Recovering From Coronavirus

Gloria Estefan has urged fans to continue taking the COVID-19 pandemic seriously after she was forced into quarantine following a mild case of the coronavirus.