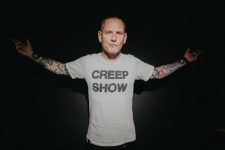 Corey Taylor Wants His Solo Music To Piss Fans Off

Corey Taylor – who is best known for being the frontman of Slipknot and Stone Sour – is branching out into solo projects with the upcoming release of his debut solo album ‘CMFT’, and has said he’s eager to make music that “pretentious pricks can’t understand”.

Corey’s lead single from the upcoming album is titled ‘CMFT Must Be Stopped’, and he admitted that whilst the single wasn’t his first choice, he now loves the decision, because the song “comes from such a fun place”.

He said: “We just went with what had the most energy, and what people would react to and I love the fact that we went with ‘CMFT…’ because pretentious pricks can’t understand it, so they just dog it. That’s perfect to me. The people who like it and can feel the fun it, love it and are having a great time. That’s what it was supposed to do, it was supposed to piss off the straights, and that’s what it is doing! The great thing about that is that it comes from such a fun place.”

Corey says his inspiration for the album was “just loving music”, as he wanted to put out a record that people would “enjoy listening to”.

He added: “I mean everyone kept bugging me about whether I was going to do a solo album and for the longest time, I said no. I mean how greedy can one person be? I’ve got two great bands, I basically have carte blanche when it comes to guest appearances and stuff. What would it even sound like?

“But then when I had all of this time, unexpectedly, I realised that I had all of these songs that I’d written through the years that don’t fit in with any band. I haven’t been able to give them to other bands to record, maybe this can be my solo record. It really was that simple.

“When you listen to the album, the overall theme is just loving music. My main goal, right out of the gates, was to make sure that it was an album people would enjoy listening to. Big hooks, big choruses, big dumb rock, just a fun, party album.”

And the musician “had a total blast” recording his solo project.

Speaking to Music Feeds, he said: “I had a total fucking blast. But it was also pretty fucking effortless if I’m being honest. Some of these songs had been hanging around in my head for 15 or 20 years, so it wasn’t like I hadn’t played them before. So getting the opportunity to play them with this band I put together, really brought another energy and excitement. So I just got in there and really let it rip, and laid into it, vocally, it was such a blast.”