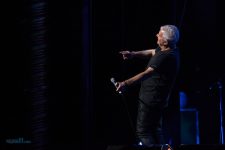 Daryl Braithwaite will turn 70 in January 2019

Daryl Braithwaite was 20-years old when he joined Sherbet in 1969. In two weeks he will turn 70.

While Daryl has already passed retirement age for Australia he is showing no signs of stopping work. His next big national tour is for Red Hot Summer with John Farnham from March 23, 2019.

Daryl (and his twin brother Glenn) were born in Melbourne on 11 January, 1949. The Braithwaite boys went to school in South Yarra and at one point (in 1961) were in the same class as Olivia Newton-John.

Daryl’s first solo hits started with he was still a member of Sherbet. His cover of ‘You’re My World’ reached no 1 in 1974. He performed the song live with Sherbet.

Daryl released his first post-Sherbet solo album ‘Edge’ in 1988. It made him a solo star, selling near 300,000 copies in Australia and reached no 1 in Australia. Daryl was no longer a pop star. He had reached adult rock status with ‘As The Days Go By’.

The next album ‘Rise’ featured ‘The Horses’, a song he is now most known for.

‘The Horses’ wasn’t intended as a single. Daryl was a fan of Rickie Lee Jones who wrote the song with Steely Dan’s Walter Becker and first released it on her 1989 album ‘Flying Cowboys’.

The title track from ‘Rise’ failed to make the Top 20 but ‘The Horses’ went to no 1.

The video was filmed on Great Keppel Island.

Daryl has had 15 solo hits: