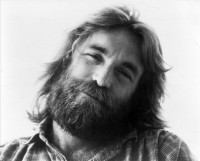 Dennis Wilson of the Beach Boys

Dennis Wilson, the deceased drummer for the Beach Boys, has had his story placed on hold.

Actor Aaron Eckhart dedicated six months learning to sing and play drums and piano to portray the Beach Boy’s Dennis Wilson in the film The Drummer. Unfortunately, he had to go to Australia to make the film I, Frankenstein before working on the Wilson film and that shoot proved so exhausting that he had to postpone any further roles.

It’s that delay that appears to have sent The Drummer to the dead picture pile. Wilson’s children, Carl and Jennifer, had agreed to the making of the film but were uncomfortable with the script which they felt emphasized their father’s alcohol and drug use. The additional time from the delay appears to have given them time to change their mind as they have issued a statement saying “The Dennis Wilson Trust can confirm that there is no plan for proceeding with the Drummer project.”

Wilson’s writing partner, Gregg Jakobson, is not happy with the decision, telling The Hollywood Reporter “The kids, they get bad counseling. It’s the estate … they don’t know anything about the entertainment business. They hardly even really ever knew their dad.”

In addition, J2 Media, the signed distributor for the film, has said that they no longer represent the production and Unclaimed Freight Productions, who had staffed up for making the film, used the crew to make CBGB and have now reassigned them to Midnight Rider: The Gregg Allman Story.

Others that had been signed for the film, which was expected to start shooting in June of 2012, were Vera Farmiga as Christine McVie, Chloe Grace Moretz as Wilson’s daughter and Rupert Grint as close friend Stan Shapiro.

Brian Wilson is furious that his former band has agreed to play ay a hunting event in Nevada in front of Donald Trump Jr.

Brian Wilson is ready to rock again after postponing his summer tour to deal with mental health issues.

Hanson are still over the moon after Beach Boys collaboration

Hanson are still in awe at collaborating with The Beach Boys star Mike Love because they learned to harmonise from listening to the Good Vibrations hitmakers as kids.

Brian Wilson has announced that, because of ongoing back pain, his doctor has advised him to have immediate surgery which he hopes to relieve the problem.

Beach Boys founders Brian Wilson and Al Jardine will tour the classic 1964 Beach Boys Christmas album at the end of the year.

Charles Manson is dead. Good riddance. The serial killer had a bizarre tir-in with the music industry