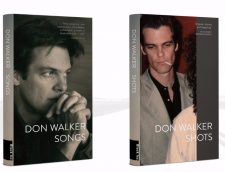 When Jimmy Barnes released his sixth solo album ‘Heat’ in 1993 it had a familiar sound on one track. ‘Stone Cold’ was written by his former Cold Chisel band mate Don Walker. It was the first thing Don and Jimmy had done together since the break-up of Cold Chisel five years earlier.

On July 1, Don Walker’s ‘Songs’, his collected lyrics, will be published. One of those songs is ‘Stone Cold’.

“‘Stone Cold’ wasn’t written for Jim,” Don Walker . “I quickly identified as I was writing it as something that would be perfect for Jim”.

‘Stone Cold’ pretty much wrote itself after Don dropped his daughter off at school. “It was written in the first year that I had custody of my little girl Danielle,” he said. “I had put her into, what I thought on paper should be, a good school. It was a private girl’s school in Rose Bay. Each morning I would drive her from King’s Cross out there in her little school uniform and then drive back to the Cross and probably some mornings go back to bed. On this particular morning I wrote this song driving back from Rose Bay in real time. There was very little that wasn’t written in that drive. Between the hill above Rose Bay along the waterfront through Double Bay to Kings Cross, Stone Cold was written. As I was writing it, I knew it would be a lyric, melody and genre of music that would be perfect for Jim”.

Don never considered the song for himself. “I had this song under my belt, and I thought ‘shit, look at this. I’ve got this song that is bulls-eye for Jim and nobody else’. It’s a big black ballad. It’s a Ray Charles song. There are not many people around in Sydney that could sing that.

Listen to Don Walker talk about the creation of ‘Stone Cold’.

Jimmy says, ‘His stories written on the pages of the book lie silent, but as you read them they come to life. I can still hear the melodies but while I read the book, the music seems to fade into the background and new melodies, new meanings, present themselves.’

Songs will be released via Black Inc. on Monday, July 1, 2019, and will available in Hardback. Also released on the same day will be the widely applauded Shots on Hardback for the first time.

The following packages are available for order now at www.donwalker.com.au/songs

14 Songs Tracklisting
(Available only as part of the Songs and Shots pre-order packages at www.donwalker.com.au/songs)