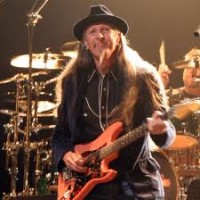 Pat Simmons of the Doobie Brothers, photo by Ros O'Gorman

The Doobie Brothers are joining the list of classic rock and R&B artists who have teamed with country artists to make a covers album.

The new effort, Southbound, is scheduled for November 4 and will include performances by such country superstars as Blake Shelton, Toby Keith, Brad Paisley and the Zac Brown Band.

Lagniappe Mobile talked with guitarist Tom Johnston about the band with the subject eventually turning to the upcoming album. The idea for the set came from David Huff who tracked the Doobies down while they were on the road to pitch the idea of an album covering their classic songs by country artists.

After starting work with another company, they eventually came under Gary Overton at Sony who latched onto the project and ran with it. Huff stayed on to produce, letting each of the artists pick the tracks they wanted to perform. According to Johnston:

It’s a best-of, if you will, but it’s re-done by incredible Nashville players in the studio, who were incredibly good and fast. We had three guitar players going at one time, and Michael McDonald playing keyboard on his tunes. So, we would go in and cut the track using one or two takes, and it was done. It had guitars, drums, bass and pedal-steel, and it was phenomenal.

I’ve never done anything like that before, and I was just blown away at how efficient and good they were. Then, we had the artists themselves come in. Most of the time, we weren’t there to witness their performances. I was in L.A. when Blake Shelton did his performance. I got to see Chris Young do the vocal on the song he did. So, it’s been an interesting project and having heard the results, I have to say that I am pleasantly surprised.

Johnston said he was not able to reveal yet the songs each sang, but he did list the artists with which they collaborated including a few who just played their instruments: