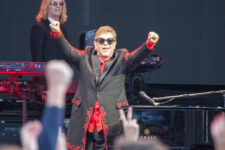 Elton John at A Day On The Green at Rochford Winery on Sunday 1 October 2017. Photo by Ros O'Gorman

Elton John and his ex-wife Renate Blauel have resolved a legal dispute triggered by the rocker’s autobiography and the Rocketman biopic.

Blauel, who was married to Elton from 1984 to 1988, sued her ex over the summer, claiming he had broken the terms of their divorce deal by discussing details of their time together.

She demanded an injunction to prevent future disclosures, as well as hefty damages, but now the former couple has settled the matter.

“The parties are happy to announce that they have resolved this case, in a way that acknowledges Renate’s need for privacy,” read a joint statement from lawyers for both parties, reported by the BBC.

“For her part, Renate acknowledges that Elton has acted in a dignified and respectful way towards her in the last 30 years and has been always happy to help her,” it went on, clarifying: “They will not be discussing each other, or their marriage, in future and will be making no further comment about the case.”

Renate’s lawyers claimed the details Elton disclosed in his memoir triggered mental health problems, including “depression and anxiety”, for their client, but his legal team argued the details in the book and film were public knowledge and that the divorce agreement applied only to “private and confidential matters”.

Blauel also took exception to scenes in Rocketman, including a restaging of the former pair’s wedding day and sequences suggesting the couple slept in separate bedrooms.

The settlement means Elton and Renate won’t have to meet in court.

Elton came out as a gay man shortly after the marriage to Renate fell apart. He is now married to movie producer David Furnish.