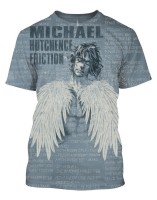 Michael Hutchence spent the last weeks of his life in Los Angeles working with Black Grape’s Danny Saber for what would become the posthumous self-titled album. Danny has opened up for the very first time for Noise11.com about Michael’s final weeks.

Some incredible things happened in the last week’s of Michael’s life. He wrote his final song ever with Danny. ‘Baby Its Alright’ was eventually released on the solo album. Michael’s very last performance was covering a David Bowie song at the Viper Room with Danny and Stones backing singer Bernard Fowler.

Danny tells a totally different story about Michael to what was portrayed in the ‘Never Tear Us Apart’ mini-series. “The problem I really have with the mini-series is that it is a soap opera,” Danny tells Noise11.com. “Michael was far more complex than that. His life was Shakespeare and they are trying to do Neighbours. The real story is much deeper than that. I enjoyed it for the entertainment value. We both know who was behind it. It would be nice to write your own version of history about yourself wouldn’t it?”

Saber says Hutchence is not treated with respect in the mini-series. “One of the things about the mini-series I found insulting was when they turned over the writing to Andrew and Michael, you see Andrew working his ass off busting his balls to write ‘Need You Tonight’ then Michael shows up in Hong Kong and Michael disappears and goes upstairs and comes back with a hit song. You know what? Michael worked his ass off and the notion that it was that easy, you can look it one way and think they were trying to say he was a genius, but the truth it that it is really quite insulting.”

Michael Hutchence had already grown bored with INXS when he connected with Saber. “He had outgrown INXS at that point creatively and he was looking for something else,” Danny said. “The band had become so big and was on the downturn and he wanted to grow. I think it was more artistically driven than anything. It’s hard for bands that big. It’s like the changing of the seasons. Money comes into the equation and you don’t want to take creative risks anymore and Michael was all about creative risks”.

While Hutchence needed a change Saber says that Michael never discussed leaving the group. “There was no talk of breaking up,” he said. “I think what Michael was looking for was an alternative and to take a break. He did not want to come back to Australia and do that tour. We had that conversation about staying here. He felt an obligation and a commitment to do it, I guess. I think he was frustrated. He felt like there was pressure on him to deliver for everybody else so that they could maintain their lifestyle. That’s a nice way of putting it. He wasn’t getting a lot back so it was becoming gruelling, a grind”.

The night Michael died, Danny was with Mick Jagger and he does not believe Michael’s death was suicide. “I was with Mick that night when we found out and it was shocking,” he said. “He was not that kind of guy. I think that whatever happened was some crazy accident. Nobody really knows. He was just not one of those guys who would take himself out”.

Danny has also discussed Hutchence’s death with one of Michael’s closest friends, Bono. “After Michael died I was working with U2 and I had a conversation with Bono about this,” he said. “He told me that he and Michael were talking after Kurt Cobain died and they both mutually agreed that the whole rock star taking himself out thing was like, there was just no way. Bono was convinced that whatever happened was like some freak accident combined with the planets lining up. It was just not who he was, at least the guy I knew.”

The album Saber was working on with Hutchence ‘Michael Hutchence’ was released two years after Michael’s death but Hutchence had been planning it for years. “Initially he started that record as early as ’93 maybe,” Danny said. “He was certainly doing the rounds looking for people to work with. There is a track on the record from some writing sessions with Tim Simenon (Bomb The Bass). The reason he came to me was because he was such a fan of the Black Grape record. Remember I was just a kid at the time. That was just my second record. Shaun Ryder was in his own category. Working with Shaun was incredible but Michael was a different kind of a guy. He was an international rock star. That was really my first taste of what I imaged the music business to be. With Andy (Gill) he liked what they were doing but felt there was something missing. He was always on this mission to find new music and discover a new sound. I remember going to a record store with him and he bought everything. Anything that looked remotely interesting to him he bought it. He would listen to it. He was always on a mission to grow as an artist. I think that is what he has in common with some of the other people who left early. He was super-highly sensitive and intuitive. He was just a really unique guy in that way”.

‘Friction’ was one of the songs not completed at the time but was recently finished off by Saber and has now been released. “That was something that was basically around,” he said. “I took the vocal and built the song around that. I finished it recently. As far as the vocal arrangement, it was all there. There is a batch of material, of unfinished stuff, but I have been really conscious of keeping the quality control at a level that Michael would want the public to hear. With ‘Friction’, it is a great track and it deserves to be heard.”

Danny Saber is indebted to Michael Hutchence for launching his career. It was Hutchence who gave Saber the connections that set the template for a career that has seen him go on to work with Madonna, U2 and the Rolling Stones. “Michael was instrumental in capitulating my career,” he said. “When I went to London and first started working with him we went out and in walked Mick Jagger. Mick and Bono and all those kinds of level people really watched Michael and respected Michael. He had the respect of his peers. Mick was working on a solo album at the time and Michael introduced me. Mick was familiar with Black Grape and Michael really instigated me working with the Rolling Stones. At that point he could have kept me to the side but he was so generous in that way. I feel it is my place to allow Michael to take his place in history because he is being swept under the rug and forgotten and becoming a bigger part of the pie when the truth is he was front and centre. They were a great band, don’t get me wrong, but Michael was the star”.

Saber co-wrote three songs ‘Breathe’, ‘Possibilities’ and Michael’s last ever song ‘Baby It’s Alright’ with Michael for the ‘Michael Hutchence’ album. “The first song we wrote was ‘Breathe’ and when you listen to it, it is sort of like this Zeppelinesque sort of thing. That was my first instinct with Michael, lets see how heavy we could go because he has such a great classic rock voice. INXS were masters of mixing dance music and guitars and stuff. I just wanted to hang a left with him and see how far we could go and he loved it. I love that song”.

“I consider the song ‘Possibilities’ one of the best songs I have ever co-written with anybody. There is a 90-piece orchestra and its just really beautiful and one thing to keep in mind is that all of the vocals were writing sessions and Michael was always on. He always delivered whenever there was a mic in front of him. He was a hard worker. History is so filled with these people who “are so naturally talented” and “they got their gift from God”. People have a knack for things but the one thing I have learned is that people who are great have one thing in common. They have their own standard that they want to live up to and they work their asses off. They don’t just get there because it’s easy”.

‘Baby Its Alright’ was the last song Michael Hutchence ever wrote and David Bowie’s ‘Suffragette City’ was the last song he ever performed live. “‘Baby Its Alright’ that was a song we wrote the last week Michael was in LA, “ Danny said. “I guess it was the last song Michael ever wrote. When Michael was in LA I put a little show together with my friend Bernard Fowler who is the backing singer in the Stones. We did a show at the Viper Room, it was an allstar band gig. I never got to perform with Michael in public before so I begged him, you have got to come up with me, it was an amazing night. He did ‘Suffragette City’. Billy Gibbons was there. So I got to perform with him a few days before he went back to Australia”.

Mick Jagger was nervous ahead of the Rolling Stones' Glastonbury debut in 2013 because Bono had warned him it was one of the toughest gigs around.

U2 frontman Bono is reportedly teaming up with a property developer to build a cultural and wellness hub in his native Dublin, Ireland.

Noel Gallagher is expected to be announced as the special guest of U2 when their ‘The Joshua Tree’ Australian tour is announced this week.

Bono and The Edge turned buskers on Christmas Eve in support of The Simon Community in Dublin.

Rocker and activist Bono has come to cherish his unlikely friendship with former U.S. President George W. Bush after working together to fight the HIV/AIDS epidemic in Africa.

U2 star Bono and comedians Will Ferrell and Chris Rock are teaming up for a U.S. TV special to raise money and awareness in the fight against AIDS.