Faker Hard At Work On Next Album - Noise11.com 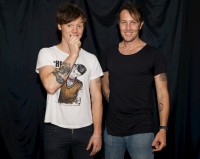 Faker Hard At Work On Next Album

After giving away the long-awaited Get Loved, Faker are already talking titles and tracks for their next album.

The Sydney new-wave revivalists released their third album Get Loved online just before Christmas in 2011.

It was already a year old at that point, and rather than wait until 2012 to officially release it, they “set it free” on the internet.

In the statement about releasing it, singer Nathan Hudson wrote that with Liam O’Brien on bass and Chris Stabback on the drums, “It feels like a real band again.” Therefore, they’ve been right back to work on the next album.

Today, Hudson tweeted, “So many things to think about. Dummy working title for the next record: Shiny Coins. Favourite song so far; maybe, Goldmine or 1 Track Mind.”

While we wait for new tunes, you can catch Faker appearing around the nation on the Big Day Out.

Check out our chat with Nic and Nathan just before they announced the Get Loved download experiment.