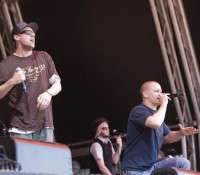 On working with Montaigne and Tom Thum he said, ‘I loved working with Montaigne and Tom. Montaigne has such an amazing natural gift and a great energy. When you watch her record you can tell that she’s going to have such a big life. Obviously Tom is incredibly gifted too. He can rhyme, produce, beatbox, b-boy, paint… To tell the truth, he’s so talented that sometimes it’s actually kind of frustrating being friends with him.’

‘1955’ was directed by Rich Coburn. “This clip plays around with the wholesome image of the 1950s that exists in our minds. Set in a diner, it’s a world where everything is perfect and the people polite and happy. However, we see this through the eyes of an outsider. A young girl sits observing everything and it’s through her eyes that we see beneath the surface things are not what they seem. As the radio talks of Flying Discs in the sky, it’s almost like our “Visitor” has a capacity to reveal the repressed emotions within our perfect world inhabitants until all those pent up emotions explode.”