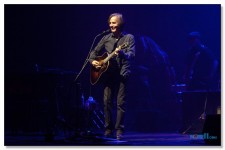 Jackson Browne is recovering in a Los Angeles hospital after testing positive to Covid-19.

The legendary singer told Rolling Stone magazine “As soon as I had a small cough and a temperature, I tested [for Covid-19].

Browne suspects he contracted the virus during his recent trip to New York to perform at the Love Rocks benefit, also featuring Cyndi Lauper, Dave Matthews and Derek Trucks. He said several other people at the show have also tested positive but he did not name names. He did however say it was a crew member but does not know who had it first and spread it.

He did say, “I feel lucky that I’m not really badly affected. I guess I’ve got a really strong immune system. There’s so much we don’t know. The one thing you can do is not go anywhere, not show up anywhere. Now I wish I hadn’t gone to New York and done this benefit. How much simpler would it have been had I just called in and said, ‘No, I’m not going to travel on a cross-country flight and spend two days in New York with all these people that are singing all over the country.’”