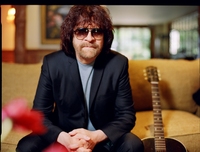 A galaxy of stars joined music therapy charity Nordoff Robbins at the O2 Silver Clef Awards at Grosvenor House Hotel in London, to celebrate some of the biggest artists in music.

Music-News.com was there to interview the music stars. Click to see the interview with Jeff Lynne.

Nordoff Robbins patron and presenter Gaby Roslin hosted the event which featured the hotly anticipated O2 Silver Clef Auction with some incredible music memorabilia including a signed Jeff Lynne guitar and raised almost £120,000 for the charity. The total amount generated for Nordoff Robbins on the night was £602,000.

Others attending the Awards included Fearne Cotton, Ricky Wilson and MNEK who were interviewed by Peter Andre on the blue carpet.

The full list of winners and presenters at the O2 Silver Clef Awards were:

Electric Light Orchestra founder Jeff Lynne believes he has around 2,000 cassette tapes with recordings from his legendary band, which he'd love to listen to again, but he doesn't have a tape player to play them on.

Hugh McDowell, the cellist and early member of Electric Light Orchestra, has died after a long illness at the age of 65.

Celebrating the 40th anniversary of the Electric Light Orchestra's (ELO) top-selling double album, Out of the Blue, Legacy Recordings, the catalog division of Sony Music Entertainment, will release the first-time-ever picture disc edition of the ELO classic available everywhere on Friday, September 29.