John Farnham All The Hits By The Charts - Noise11.com 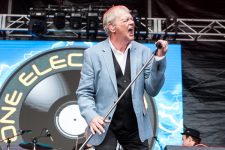 John Farnham All The Hits By The Charts

John Farnham has amazed an incredible 36 Top 40 hits in Australia and what is even more incredible is that the last one was 22 years ago.

The John Farnham Top 40 catalogue sits within a tight package of 30 years from between 1967’s ‘Sadie (The Cleaning Lady) to 1997’s ‘Everytime You Cry’.

During that time there were lean times too. In 1973 the hits dried up after ‘I Can’t Dance To Your Music’ but returned with John’s stunning cover of The Beatles ‘Help’ in 1980. His version was so ‘of the times’ that when Tina Turner covered ‘Help’ she performed John’s arrangement, not The Beatles.

John has rarely had international success. ‘You’re The Voice’ did reach no 6 in the UK and was also a number one hit in Germany and Sweden. ‘Age of Reason’ peaked at no 20 in Germany.

In the USA however, the only two times John Farnham has been in the American Top 40 was as lead singer of Little River Band. ‘The Other Guy’ reached no 5, ‘We Two’ reached no 15.

John Farnham by the hits