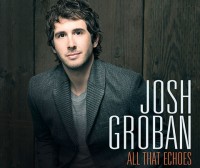 Josh Groban All That Echoes

Josh Groban Will Live In CSI:NY

Unlike Justin Bieber’s performance in the TV show ‘NCIS’ Josh Groban will survive through to the end of his guest appearance on ‘CSI-NY’ on Valentine’s Day.

Josh Groban All That Echoes

Bieber was a baddie in ‘NCIS’ but Groban will appear as himself, good guy Josh. “I think sadly, it wasn’t any more dramatic than that. I think if I had shot up the place maybe my music wouldn’t have sold it by the end of the episode so I needed to stay the good guy,” Josh tells Noise11.com.

Josh Groban will appear on the February 14 episode of ‘CSI-NY’ performing his new song ‘Happy In My Heartache’ from his forthcoming album ‘All That Echoes’. “The CSI-NY thing was just one of the fun ways to get one of the songs from the album on there,” he says. “I love acting and I love playing other roles but this was just a situation where I play myself with a piano and sang my song. It wasn’t any more complicated than that. It is a great show and the cast and crew were so, so nice. It was the perfect song for the character and the Valentine’s Day episode when it’s going to be aired. I love when that kind of synergy works out”.

Josh is happy the way the showed turned out but doesn’t rule out playing the bad guy role one day. “I literally dodged a bullet,” he said. “I was only used for my musical prowess and then they let me off the hook. I would love to be on a show like that and really play some crazy sicko. Sure, blow my head off too. The more gruesome your death is in these shows the longer you have to be in the make-up chair. I was actually glad that all I needed was a little light foundation”.

Josh Groban will release his new album ‘All That Echoes’ on February 1 in Australia and February 5 in the USA.

Tagged as: All That Echoes, CSI:NY, Josh Groban, Justin Bieber

Josh Groban will return to Australia in April.

Josh Groban Covers Glen Hansard On All That Echoes

Josh Groban has covered the Academy Award winning Glen Hansard song ‘Falling Slowly’ on his new album ‘All That Echoes’.