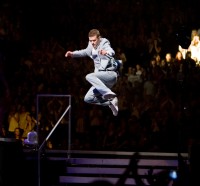 Justin Timberlake reportedly plans to delay starting a family to focus on his music comeback.

There have been rumours that Justin and his new wife Jessica Biel were eager to try for a baby, after actress Jessica revealed she wanted to take time away from work. However, new speculation suggests Justin doesn’t want to commit to becoming a father just yet as his schedule is packed with scheduled performances.

‘Any baby plans Jessica may have had have been put on hold because Justin just wants to work right now,’ a source close to the couple tells RadarOnline.com. ‘They’ve had a long, hard talk about it, and Justin convinced Jessica that they can wait a little, especially since he will be promoting his music all around the world this year.

‘He’s told her he wants to be a hands-on father, and that won’t be possible with everything he’s got on at the moment.’

Justin recently marked his return to the music scene with the release of the single Suit & Tie, from his forthcoming album The 20/20 Experience.

The 32-year-old star has lined up appearances at upcoming music events including the Grammy Awards and the BRITs and plans to showcase his new material all over the world.

Jessica understands that Justin needs to concentrate on his singing and is prepared to put their family plans on hold.

‘Jessica is actually in agreement with Justin, she wants him with her every step of the way, so she’s reluctantly agreed now’s not the time to have a baby,’ the source added.

Since taking a break from music, Justin has appeared in a host of movies including The Social Network, Friends with Benefits and Bad Teacher.

Justin and Jessica got married in October last year in a private ceremony in Italy.

Justin is scheduled to release his third solo album The 20/20 Experience on March 19.

Justin Timberlake has shown his support for his wife Jessica Biel, after she was heavily criticised for her vaccination stance.

Timberlake and Biel Are Having A Girl

Justin Timberlake and Jessica Biel are to become parents to a baby girl, according to reports.

Justin Timberlake dropped a new track from his latest album after making a triumphant return at the 55th Annual Grammy Awards on Sunday night.

Alicia Keys danced the night away to 'old-school hits' at her album launch party on Tuesday night.

Justin Timberlake has issued a public apology for the 'distasteful' wedding video in which homeless people congratulate him on his nuptials.

Justin Timberlake has emerged with his wedding ring on hand after exchanging vows with Jessica Biel.