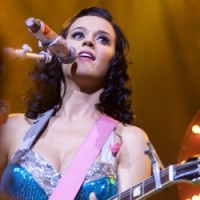 Katy Perry promises “you will truly know me” after seeing her forthcoming 3D tour film.

The film, titled Katy Perry: Part Of Me, in keeping with the most recent single from her seemingly evergreen Teenage Dream album, was shot by the same team that made Justin Bieber’s Never Say Never.

She said in a statement that the film “reveal the highs and lows and nuts of bolts of this extraordinary ride. I promise you, after seeing this film, you will truly know me.”

Judging by the trailer, the film will cover her entire career, from her Christian pop beginnings, to writing a song titled ‘Ur So Gay’ to shooting whipped-cream out of her bra and performing to hundreds of thousands of fans worldwide.

Katy Perry: Part Of Me will hit theatres in July. Check out the trailer below.

Metallica Announce Through The Never Movie At Comic Con

Metallica has always made it clear that their new 3D film, Through the Never, will have story elements included with the concert footage. Skeptics said "So what? So was Spice World."

Last year, Metallica announced that they would be putting out a 3D concert film and the footage was shot in August during shows in Vancouver. Since that time, little has been said about the movie.

Lars Ulrich has said Metallica’s forthcoming 3D film will not be like The Song Remains The Same.

Metallica 3D Film To Be Directed By Nimrod Antal

Nimrod Antal, the director of Journey to the Center of the Earth, Journey 2, will direct the Metallica 3D movie project.