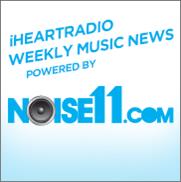 This week on iHeartRadio Music News, powered by Noise11.com, Kenney Jones of The Faces, David Draiman of Disturbed and Bob Spencer of Finch, Skyhooks and The Angels tell their story to Paul Cashmere.

Kenney Jones has an amazing story about why The Rolling Stones classic isn’t really a Rolling Stones song. Mick Jagger was the only Stone at the time playing on it and it wasn’t written with Keith Richards.

The Angels – Don’t Waste My Time
The Dead Daisies – Mexico

The Tea Party – The Bazaar
Tame Impala – Let It Happen

Former Finch singer and guitarist Owen Orford and Bob Spencer will perform together for the first time in over 40 years this weekend.

Rose Tattoo will tour for the 40th anniversary of the classic ‘Rock N Roll Outlaw’ around Australia from September when they return from the European tour.

A reinvigorated Rose Tattoo is currently enjoying a massive tour of Europe, culminating in their appearance this week at Sweden Rock Festival, a festival which is presenting one of the greatest hard rock line ups ever.

At age 60 former Finch, Skyhooks and The Angels guitarist Bob Spencer has released his first ever solo album ‘Saints and Murderers’. He tells Noise11.com that to make the record he first had to undergo therapy for overcome his fear of singing.

Angry Anderson has recruited a new Rose Tattoo line-up, which now merges the sounds of AC/DC and The Angels into The Tatts.