Lea Michele Says Fuck It If People Don't Like Her New Album - Noise11.com 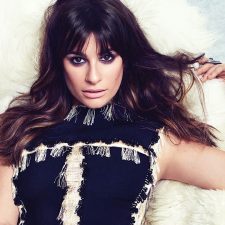 Lea Michele sat down with Billboard for an exclusive interview discussing her new album, “Places.”

In the wide-ranging interview, Michele opens up how she named her sophomore album (she held a wine-fueled seance and bounced ideas off of Jonathan Groff while reading a special gift from Stevie Nicks).

“I poured myself the biggest glass of red wine, I put Fleetwood Mac on my vinyl, I lit candles, and I legit started praying and looking for a sign,” Michele tells Billboard. “I have this incredible book that Stevie Nicks gave me in 2013 when my boyfriend [Glee co-star Cory Monteith] died. She gave me this art book of hers that she put notes in over the years and song lyrics, and then she rewrote personal notes for me that say things like, ‘Keep singing, and have faith.'”

She also dishes on who she turned to for inspiration on the album (Celine Dion) and her plans to promote it (live shows) closing the interview by saying, “Fuck it if people don’t like it,” she continues. “This record deserves all of my time and care, and that’s what I plan on doing this year.”