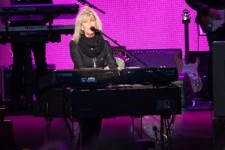 While news of a new Fleetwood Mac album has been circulating all week, there are still a lot of questions on who will participate and when it will be recorded and released.

Mac members Christine McVie and Lindsey Buckingham aren’t going to wait around for the album to come together, choosing instead to release their own duet album.

Buckingham McVie has a tentative May release scheduled as the two icons work on completing the album in the studio and, although it is most definitely a two person project, both Mick Fleetwood and John McVie are contributing.

Christine retired for sixteen years, living in the British countryside, but was coaxed back two years ago to participate in the second half of the band’s “On With the Show” tour. It was there that she also reconnected with Buckingham on a professional level. She told the Los Angeles Times “I suppose I wondered if I believed in myself. But I was like, ‘Go for it, Chris. Go for it.’ And, you know, a better thing’s never happened to me. I’ve reconnected with the band and found a fantastic person to write with. We’ve always written well together, Lindsey and I, and this has just spiralled into something really amazing that we’ve done between us.”