Listen To The First Buckingham McVie Song ‘In My World’ - Noise11.com 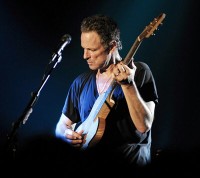 In April 2017 Lindsay Buckingham issued the statement, “”We were exploring a creative process, and the identity of the project took on a life organically. The body of work felt like it was meant to be a duet album. We acknowledged that to each other on many occasions, and said to ourselves, ‘What took us so long?”