Little May release the video for ‘As Loving Should’ - Noise11.com 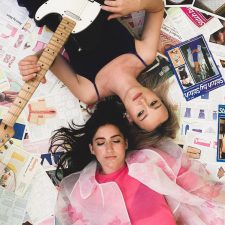 Little May release the video for ‘As Loving Should’

Little May has a video for ‘As Loving Should’ from the ‘Blame My Body’ album released last week.

“We went into this record wanting to be bold & honest with ourselves, without shame,” Liz Drummond and Hannah Field recently said in a statement on their social media pages. “Both of us had very different experiences whilst making this record, too. We wrote these songs separately and together, and in the process there was fear, joy, freedom, denial, shame, love, acknowledgment, anger, acceptance, surprise and confusion. We both became aware of ourselves and each other a little more. We tried to make sense of the world during a specific time, and in our own ways. Some of these songs were written consciously, some were written unconsciously. We wrote them to self soothe, and to have a good time. We had an incredible time making this record.”

‘As Loving Should’ was directed by Sydney team Stupid Genius. The video was shot in a single day in a Wollongong scout hall.

LITTLE MAY AND THE RUBENS 2019 EUROPEAN TOUR