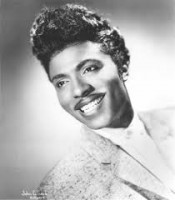 Little Richard Passes On At Age 87

Rock and Roll legend Little Richard has died at the age of 87 after a battle with cancer.

Little Richard was one of Rock and Roll’s innovators, being there at Rock’s origins. Richard Penniman was no overnight success. His first hit ‘Tutti Fruitti’ didn’t happened in 1955, four years after his first single ‘Taxi Blues’ in 1951. It was his seventh release after four years of flops.

Little Richard became a born again Christian during his Australian tour of 1957. On 12 October, 1957 he announced he was giving up show business to become a preacher. While on a cruise in Sydney he took of his Gold rings and threw them in the water. There are 10s of thousands of dollars of Little Richard jewelry at the bottom of Sydney Harbour.

Little Richard returned to live music in 1962 at the request of promoter Don Arden, the father of Sharon Osbourne. Beatles manager Brian Epstein asked Arden if The Beatles could open for Little Richard on his some dates of his UK tour and Arden agreed.

Little Richard had a major acting role in the 1984 Bette Midler ‘Down and Out In Beverly Hills’. It also gave him one more hit song ‘Great Gosh A’Mighty’.

Without Little Richard The Beatles would have had a slightly different sound. Richard is cited as a major influence for Elton John, Freddie Mercury, Prince, Jimi Hendrix, AC/DC and Bruno Mars.

Cliff Richard reaches the milestone age on October 14, and to celebrate the special occasion he's recorded two new songs, 'Falling For You' and 'PS Please', for the LP 'Music… The Air That I Breathe'.

Rock and Roll legend Dion knew Sam Cooke in the 1950s. After Sam died he wrote a song about him and didn’t revisit it until recently, more than 50 years later. To complete the song he called on his friend Paul Simon. The result is ‘Song for Sam Cooke (Here In America’ on Dion’s new ‘Blues With Friends’ album.

Joe Porcaro, a one-time musician for Rosemary Clooney, has died at age 90.

Ennio Morricone, one of the world’s most famous soundtrack composers, has died at the age of 91.

Cliff Richard is hoping his version of wartime anthem We'll Meet Again with Dame Vera Lynn will finally get a release following the beloved singer's death this week.

Little Richard By The Hits

With the passing of Little Richard Noise11 has dug into the history to plot Richard’s chart success.