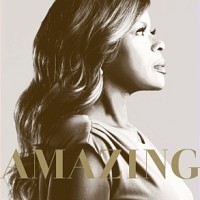 Marcia Hines can thank Joni Mitchell for the direction she took on her new album ‘Amazing’, due for release next Friday in Australia.

Marcia met Joni at a party in Los Angeles two years ago where the legendary Canadian singer songwriter suggested Marcia return to recording an album of original songs.

In recent years Marcia has recorded the ‘Marcia Sings Tapestry’ album (2010), the complete cover of Carole King’s ‘Tapestry’, the ‘Life’ album (2007), covers of songs about life and death such as ‘Imagine’ and ‘The Living Years, ‘Discotheque’ (2006) featuring songs of the disco era, ‘Hinesight’ (2004), the covers album of songs that influenced Marcia and ‘Time Of Our Lives’ featuring songs written by others.

You have to go right back to 1994 to ‘Right Here And Now’ to when Marcia was last writing songs.

When Marcia returned to Australia she was inspired by the conversation with Joni to bring her own songs to life again and from that came ‘Amazing’. After arriving back home in Sydney she met songwriters Ron E Jones and Tom Diesel and began collaborating on the new album.

Every day between now and the ‘Amazing’ album release next Friday Noise11 will feature a track from ‘Amazing’. Up first listen to the title track.

‘Amazing’ will be released through Robert Rigby’s Fanfare Records. Signed copies are available for pre-order now from JB Hi-Fi.

Marcia Hines is the ambassador for Record Store Day Australia 2014.

Russell Crowe is one of Marcia Hines’ collaborators on her new album ‘Amazing’.

Marcia Hines will release her new album ‘Amazing’ this Friday.

Marcia Hines will release her ‘Amazing’ album this Friday, marking her first original album since the 90s.