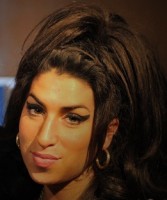 Amy Winehouse’s father thinks Lady Gaga would “be great” in a biopic of the late star’s life.

Amy passed away in London last year following an alcohol binge. She was 27 and her father Mitch has repeatedly suggested he would like a movie of her life to be made.

Gaga has previously been linked to the film, a suggestion Mitch is keen on.

“There will be a biopic. Lady Gaga is welcome to audition for the part of Amy – she would be great. Ray Winstone will probably end up playing me,” he told Heat magazine.

Gaga has previously praised Amy for opening the door for unconventional singers, saying she is the reason stars who don’t “fit the pop mould” are now famous.

As early as last year there were rumours the American star was being lined up to portray the singer.

“Lady Gaga worshiped Amy and would love nothing more than to transform herself into her idol on the big screen. She’d be spot on performing Amy’s songs and has got the right look and bolshy attitude. Gaga’s been itching to make the transition from music into movies and sees this as the ideal role to launch her film career,” an insider said.

Mitch is a big fan of Gaga and has even spoken to the flamboyant star’s mother. He claims the 26-year-old is just an everyday girl when she is at home.

“She is actually a very sweet girl,” he said. “Her mum tells me that when she gets home, there’s no lobster on her head – she just wears tracksuits and slippers and slobs out on the couch.”

Amy Winehouse To Receive A Walk of Fame Plaque In Camden

Amy Winehouse is to receive a plaque at Camden Markets in the UK.

Amy Winehouse’s father has insisted all the money raised from the late singer’s upcoming Grammy Museum exhibit will go to her charity foundation.

An Amy Winehouse exhibition is to open at Los Angeles' Grammy Museum next month.

Mark Ronson plans to one day donate a handwritten sheet of lyrics by Amy Winehouse to museum officials at the Rock and Roll Hall of Fame.

Amy Winehouse To Tour As A Hologram

Plans are underway for an Amy Winehouse hologram tour.

Unseen footage from a private 2008 Amy Winehouse Grammy night show is to feature on a new DVD and blu-ray documentary package.