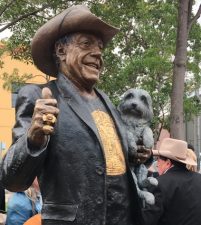 Ian ‘Molly’ Meldrum’s legacy has been permanently acknowledged following the dedication of his statue in Wangaratta Street Park in Richmond.

The bronze Molly is right across the road from one of Melbourne’s most iconic music venues The Corner Hotel.

The statue was created by sculptor Louis Lauman. The unveiling was launched by Cr Daniel Nguyen, Mayor of Yarra City Council and Martin Foley MP, Minister for Creative Industries.

In tribute to Molly before the unveiling, Michael Gudinski said, “Molly has a heart of gold … on some days”.

Later Molly’s close friend Ralph Carr shared how Molly didn’t want the statue so to sabotage the idea he insisted that they had to include his dog Ziggy. Meldrum thought that by adding his beloved pet the idea would never get passed by council. He was wrong … and so it is.

At the function after the unveiling Molly was also inducted into the Music Victoria Hall of Fame.

75-year old Molly has had a near 60 year career in the music industry covering journalism, production, record company owner and television star.