The Edge, U2 perform at Etihad Stadium. Photo by Ros O'Gorman

Could it be that we have just too many awards shows when three different ones are held on the same night?

That was the case Sunday and the ACM Awards were given out in Las Vegas, the iHeart Music Awards in Los Angeles and the Juno Awards in Calgary. While there was a bit of crossover between the three, there were few cases, such as The Weeknd who attended the Canadian awards but also won in L.A., where winners had to choose one ceremony over the other. Justin Beiber also won at both awards but chose, instead, to go to L.A. and was booed at the Canadian Awards when he received the fan voted Fan Choice Award but wasn’t at the venue.

Even though the iHeart organization and Canadians might disagree, the big awards of the night were the ACM’s which saw new sensation Chris Stapleton winning four of the thirteen contested awards. Even though there is usually at least one category where a veteran artist wins, usually Vocal Event, none were honored this year.

Canada’s Juno Awards are that country’s equivalent in importance to the Grammys and, even though they don’t have quite as many categories, the awards were still spread over two nights.

When all was done, The Weeknd had won five awards, including Album (Beauty Behind the Madness) and Single (Can’t Feel My Face) to lead all other artists.

As we wrote yesterday, Buffy Sainte-Marie was the big winner for veteran artists, taking awards for Aboriginal Album and Contemporary Roots Album of the Year. 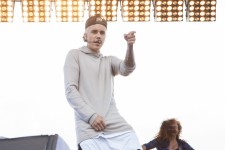 Of veteran artists, the Foo Fighters took Rock Artist of the Year and Enrique Iglesias took Latin Song of the Year for El Perdon with Nicky Jam. U2 was given the Innovator Award.

At 10am on Saturday, 13th July 2013, ACM (The Academy of Contemporary Music) broke the Guinness World Record for the 'Longest Marathon Drumming by a Team', beating the previous record by over four hours.