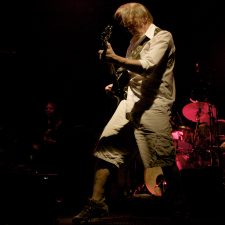 Neil Young has premiered his ‘Looking For A Leader 2020’ video in the latest edition of his “From The Porch” series.

In a statement Young says, “I invite the President to play this song at his next rally. A song about the feelings many of us have about America today, it’s part of the ‘The Times,’ and EP coming soon from Reprise Records – my home since 1968.”

The original ‘Looking For A Leader’ was on Neil Young’s 2006 Bush administration protest album ‘Living With War’. At the time Young said that entire album was “a musical critique of U.S. President George W. Bush and his conduct of the war in Iraq”.

‘Looking For A Leader 2020’ is a one-off. Young this week announced the next two releases from his archives as well as a second volume of the Archives box set.