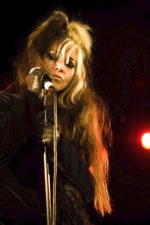 Artist/punk rocker Niagara Detroit has revealed she has spent the last seven months as a “long-haul” victim of Coronavirus.

Niagara has posted at her Facebook page, “I had COVID for 7 months. From February 8 (Detroit Art Dirty Show) to late August.

“The worst of it was the first two months. I didn’t know the last 5 months were Covid related, I just thought it was my new normal. Everything I tried to do felt like hauling BRICKS. As viruses go, it was unusually depressing. It also dredged up unusual symptoms.

“I read an August article about 6-month Covid “Long-Haulers” and I was one. The article helped a lot. It was amazing and wonderful when it started to fade away.

“Covid 19 is different for everyone, like a designer virus. Everyone I went with to The Dirty Show got it.

“The best bet: Don’t get it and don’t spread it.

I had COVID for 7 months. From February 8 (Detroit Art Dirty Show) to late August.

The worst of it was the first two…

Niagara formed Detroit’s Destroy All Monsters in 1973. In 1977 the band recruited Ron Asheton of The Stooges and Michael Davis of MC5. That kicked off a recording era with the first single ‘Bored’.

By 1982 Destroy All Monsters were regularly on tour with The Ramones and The Dead Boys.

After Destroy All Monsters split in 1985, Niagara formed Dark Carnival. Ron Asheton brought in his brother Scott for that band. Cheetah Chrome from the Dead Boys and Jim Carroll were also members.

Niagara was last in Australia in 2010 for a tour with The Hitmen.