Notorious B.I.G. Plastic Crown Sells For Over Half A Million Bucks - Noise11.com 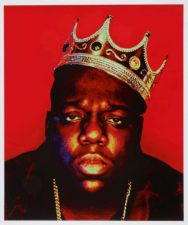 Notorious B.I.G. Plastic Crown Sells For Over Half A Million Bucks

The novelty accessory was worn by Notorious B.I.G. in his iconic photoshoot with Barron Claiborne, just three days before he was shot and killed in Los Angeles in 1997.

Claiborne told the New York Post: “This crown is a novelty item; I bought it at a place on Broadway called Gordon’s.

“Without Biggie, the crown would not be worth [six figures]. I only paid six bucks for it.”

Elsewhere, 22 letters written by the late Tupac Shakur to his high school sweetheart, Slick Rick’s diamond-encrusted eyepatch and Salt-N-Pepa’s jackets worn in their ‘Push It’ music video also went under the hammer.

Some of the money raised will go to Queens Public Library Hip Hop programs and non-profit Building Beats.

Vice President and Senior Specialist in Sotheby’s Books & Manuscripts Department, Cassandra Hatton, had said of the sale in honour of hip-hop:

“Since its birth in the Bronx in the 1970s, Hip Hop has become a global cultural force, whose massive influence continues to shape all realms of culture: music, fashion, design, art, film, social attitudes, language, and more.

“This sale is a celebration of the origins and early eras of that influence. We are pleased to announce the auction with two renowned and beloved icons whose lives and lyricism continue to resonate — Biggie and Tupac — with lots that offer an introspective look, in their own way, at the personalities behind their respective public personas.”