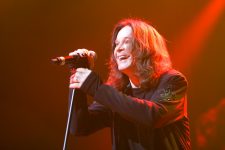 Ozzy Osbourne has revealed he’s already working on a follow-up record to ‘Ordinary Man’, which he released back in February.

The music icon was diagnosed with Parkinson’s disease in February last year, and he’s credited making his most-recent album with saving his life.

“[It’s better than] sitting on my ass all day waiting for the fucking pandemic to be over. And then you go, ‘Oh, yeah, I am a rock and roller. I’d better do an album.’

“You’ve got all the fucking time in the world to make the best album possible.”

Despite his recent health troubles, Ozzy has insisted he doesn’t have any plans to retire from the music business.

He said: “You know the time when I will retire? When I can hear them nail a lid on my box. And then I’ll fucking do an encore. I’m the Prince Of Darkness.”

Ozzy is also thrilled that his fans still enjoy seeing him perform.

The music icon – who rose to fame as the lead singer of Black Sabbath – explained: “It is the best love affair of my life. The party is on, man. I feel honoured people still want to see me.”