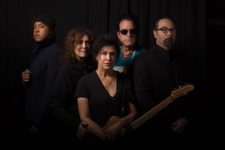 The Revolution, Prince’s band from 1979 to 1986, got back together shortly after the singer’s death last April and announced that they would be doing two tribute concerts in Minneapolis last September.

Those shows were a huge hit so the latest version of the band have decided to continue touring, setting six shows in four cities during April and early May along with playing Celebration 2017 at Prince’s former home, Paisley Park.

Participating on the tour are:

Lisa Coleman (keyboards, piano) – Played with The Revolution from 1980 to 1986. Wendy and Lisa went on to record six albums and EPs together along with becoming in demand composers for movies and TV.

Brown Mark (bass) – Played with The Revolution from 1982 to 1986. He later recorded as a solo artist and in Mazarati.

Bobby Z (drums, percussion) – Played with the Revolution from 1979 to 1986. After, he produced for Boy George and Wendy & Lisa along with recording his own album.

Dr. Fink (keyboards) – Played with The Revolution from 1979 to 1986. After the breakup of The Revolution, he continued to play with Prince through the early version of The New Power Generation. From the early-90’s on, he worked in his own studio, writing music for video games and a 2001 album, Ultrasound.

Dez Dickerson and Andre Cymone, who played at the tribute concert, are not joining for the tour.

Tickets are on sale now.