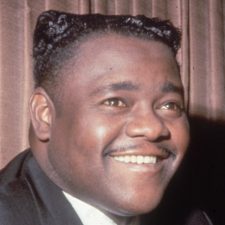 Fats Domino, one of the ten inaugural inductees into the Rock and Roll Hall of Fame and an early architect of rock music, has died at his daughter’s suburban New Orleans home at the age of 89.

Domino was born Antoine Domino, Jr. on February 26, 1928 in New Orleans, a place he would call home for his entire life. He took up piano playing while attending a local community college, learning from his brother-in-law, Harrison Verrett, and, in the summer of 1947, was seen by New Orleans bandleader Billy Diamond while playing at a backyard barbecue.

He joined Diamond’s band and, two year’s later, made his first record “The Fat Man”, for Imperial Records. Recorded at Cosimo Matassa’s J&M Studio, the song was written by Domino and Dave Bartholomew who would go on to become Fats’ professional partner for much of his career.

In 1963, Domino moved to ABC-Paramount and began recording with producer Felton Jarvis and arranger Bill Justis who tried to make his sound more mature but chart success didn’t follow. He changed to Mercury in 1965 followed by a reunion with Bartholomew on his Broadmoor label and, finally, Reprise.

Fats continued as a popular live artist over the years and, in 1986, was honored along with Chuck Berry, James Brown, Ray Charles, Sam Cooke, the Everly Brothers, Buddy Holly, Jerry Lee Lewis, Little Richard and Elvis Presley as the first inductees into the Rock and Roll Hall of Fame.

It was also this time that Domino decided he was tired of the road and would no longer be leaving his native New Orleans although her regularly played at the New Orleans Jazz and Heritage Festival.

In August 2005, Fats decided to remain in his home with his wife, Rosemary, who was in poor health, instead of evacuating for Hurricane Katrina. In the days after the storm, it was often reported that he had been killed. On September 1, Coast Guard helicopters rescued Domino and his family from his home which was almost completely under water. He lost almost everything in the flooding including most of his gold records and other career memorabilia.

A foundation was started to restore his home, which was eventually completed. He only made occasional appearances over the rest of his life and appeared as himself in a third season episode of the HBO series Treme.

Cliff Richard reaches the milestone age on October 14, and to celebrate the special occasion he's recorded two new songs, 'Falling For You' and 'PS Please', for the LP 'Music… The Air That I Breathe'.

Rock and Roll legend Dion knew Sam Cooke in the 1950s. After Sam died he wrote a song about him and didn’t revisit it until recently, more than 50 years later. To complete the song he called on his friend Paul Simon. The result is ‘Song for Sam Cooke (Here In America’ on Dion’s new ‘Blues With Friends’ album.

Joe Porcaro, a one-time musician for Rosemary Clooney, has died at age 90.

Ennio Morricone, one of the world’s most famous soundtrack composers, has died at the age of 91.

Cliff Richard is hoping his version of wartime anthem We'll Meet Again with Dame Vera Lynn will finally get a release following the beloved singer's death this week.

Little Richard By The Hits

With the passing of Little Richard Noise11 has dug into the history to plot Richard’s chart success.