Rapper 21 Savage Arrested In the USA for Overstaying Visa - Noise11.com 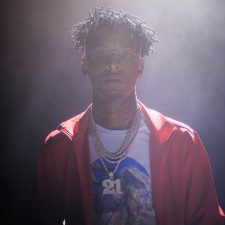 Rapper 21 Savage Arrested In the USA for Overstaying Visa

Rapper 21 Savage has been arrested by U.S. immigration officials amid allegations suggesting he is actually a Brit who overstayed his visa.

21 Savage, real name Shayaa Bin Abraham-Joseph, was picked up by Immigration and Customs Enforcement (ICE) agents in Atlanta, Georgia early on Sunday as part of a “targeted operation with federal and local law enforcement partners,” according to authorities. He is British.

Until the news of his arrest hit headlines, 21 Savage was thought to have been a local act from Atlanta, but ICE bosses claim the hip-hop star is actually a U.K. national without the correct paperwork to remain in America, and now he is facing deportation.

“Mr. Abraham-Joseph was taken into ICE custody as he is unlawfully present in the U.S. and also a convicted felon,” an ICE representative declares in a statement issued to Atlanta news station WSB-TV.

“Mr. Abraham-Joseph initially entered the U.S. legally in July 2005, but subsequently failed to depart under the terms of his non-immigrant visa.”

Savage, 26, was previously convicted of drug counts in 2014, but his attorney, Dina LaPolt, claims it’s all one big “misunderstanding”.

“We are working diligently to get Mr. Abraham-Joseph out of detention while we work with authorities to clear up any misunderstanding,” LaPolt tells TMZ. “Mr. Abraham-Joseph is a role model to the young people in the country – especially in Atlanta, Georgia and is actively working in the community leading programs to help underprivileged youths in financial literacy.”

The news of his legal trouble emerges during a high point in Savage’s career – his latest project, I Am > I Was, hit number on the U.S. albums chart upon its release in December (18), while he is also nominated for two Grammy Awards for Rockstar, his hit collaboration with Post Malone, but his arrest threatens his ability to attend the ceremony in Los Angeles next weekend.