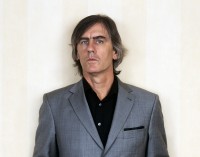 This tour is hot on the heels of the release of Quiet Heart: The Best Of The Go-Betweens, curated by Forster and fellow members Lindy Morrison, Amanda Brown and Robert Vickers.

Of course, Forster was half of the shining songwriting partnership with Grant McLennan, but his four solo albums have received rapturous critical acclaim in turn.

The solo shows will span his influential career with the Go-Betweens, as well as his solo work and select covers.

All tickets are available from the venues.

Queensland’s Grant McLennan Fellowship is calling for nominations for 2018 grants.

Syria Lamonte may have been Australia’s first-ever pop star. Syria was the first known Australian to make a commercial recording and her song ‘They Always Follow Me’ has been added to the Sounds of Australia archives.

EMI will release the first volume of the definitive Go-Betweens collection, ‘G Stands For Go-Betweens’ in January.

Lindy Morrison, drummer for The Go-Betweens from 1980-1989 and now board member of the Phonographic Performance Company of Australia (PPCA), was awarded the Order of Australia on Australia Day.